This tutorial introduces an advanced concept in QCAD to print drawings by creating a layout. A layout is an arrangement of parts of the drawing, accompanied with a drawing border and possibly other elements. A layout shows how the drawing will be printed.

When working with layouts, make sure that the block list is shown. The block list shows all blocks of a drawing, including the model space block and layout blocks. Use View > Block List to show the block list.

When starting a new drawing in QCAD, the model space (also "model" or "drawing model") is shown. This is a special block which holds the main drawing in real size (1:1). In other words, this is where you create the geometry of your drawing.

A layout (also "layout block" or "paper space") is another special type of block that is usually used for printing a drawing or parts of a drawing. A layout shows one or multiple parts of the drawing, often accompanied by a drawing border and drawing header. Each part of the drawing can be shown at a selected scale and angle.

Consider the example "flange.dxf" which comes with every installation of QCAD. When you open the drawing in QCAD, you can see the model space where all the geometry is created in real size. The geometry is typically arranged in any way that happened to be convenient for constructing it. It is usually not arranged in the way the drawing should be printed. 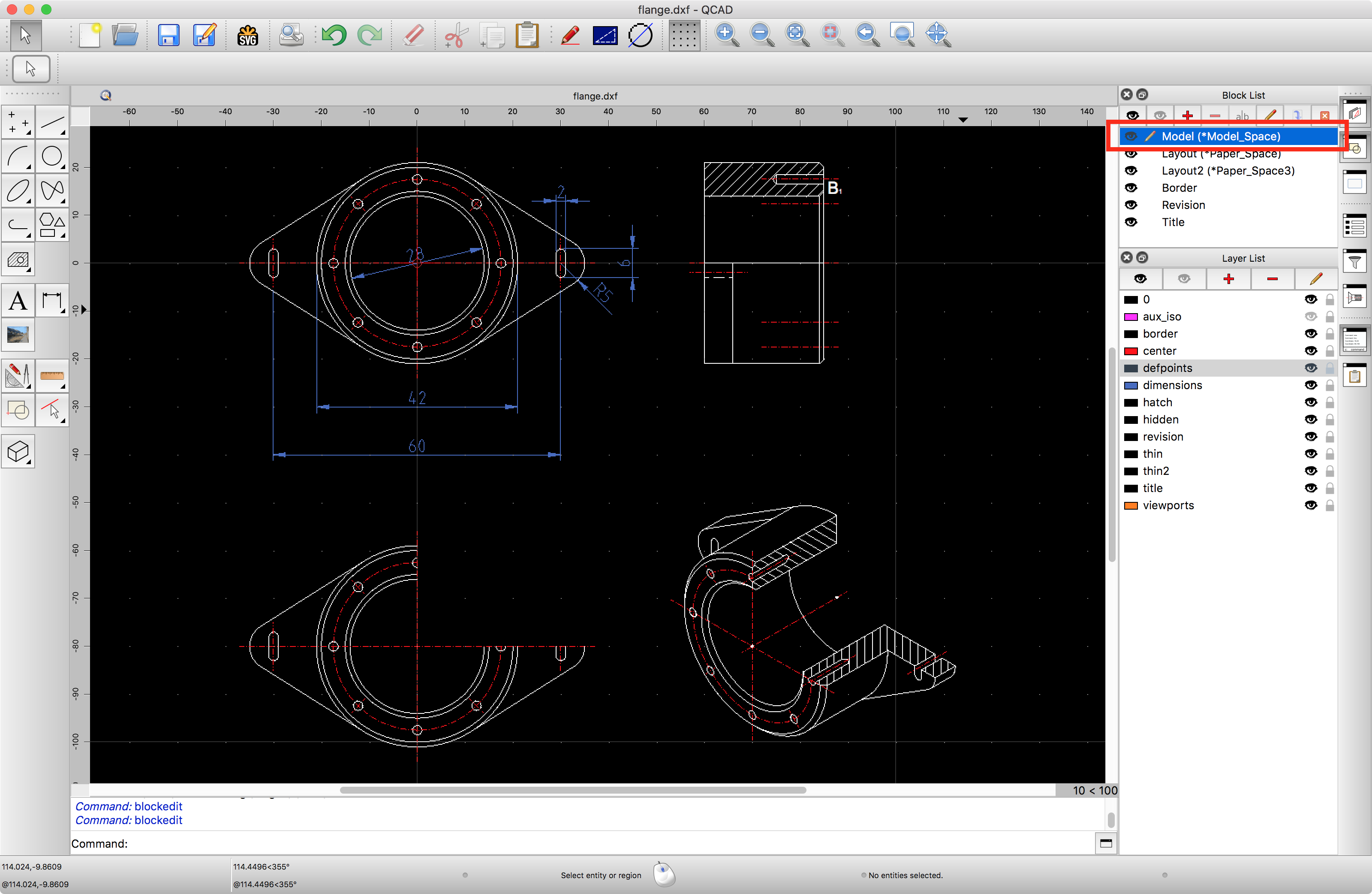 If you switch to the first layout (listed as "Layout (*Paper_Space)" in the block list), you can see that the same drawing has been re-arranged, a border has been added and a detail of the drawing is shown at a different scale: 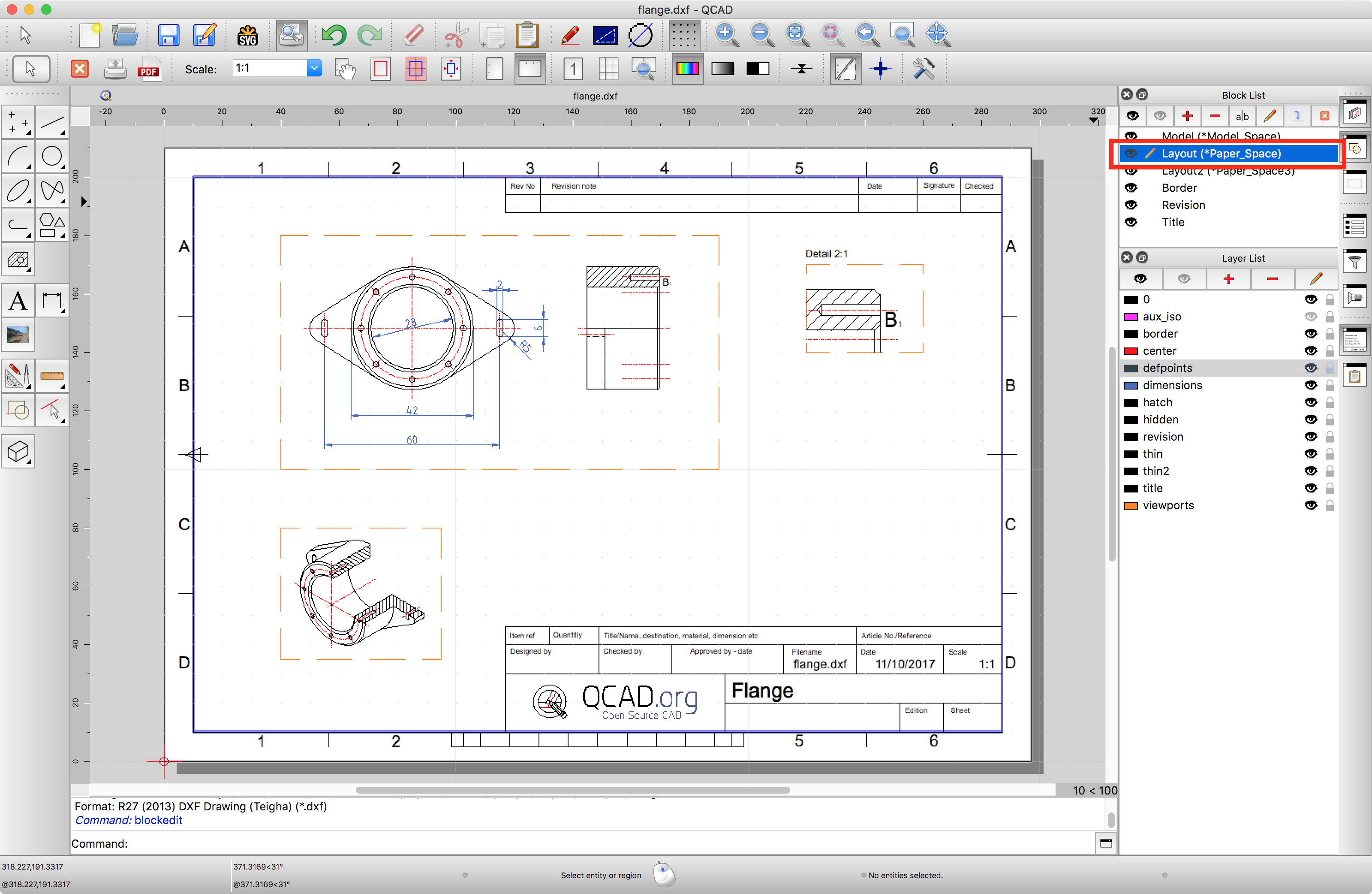 It is important to understand at this point, that this is still the same drawing. The objects shown inside the orange, dashed borders have not been copied or scaled and when the drawing model is changed at any point, the layout immediately reflects these changes. A layout block can also contain any kind of own drawing elements, but usually contains a drawing border and a drawing header or legend. In addition, a layout usually contains viewports. These are the orange, dashed rectangles shown above.

The rectangular areas with a dashed orange border in the layout above are called viewports. A viewport can be described as a window to the drawing model. It shows a part of the drawing model in a layout. You can also think of a viewport as a special kind of a block reference that always references the model space block and is clipped at a given size.

The detail B1 shown in our example is shown twice in the layout: once in the overview at the left and again, at a larger scale at the right. However, there is no duplication of data. The same data is shown twice, through two different viewports at two different scales. 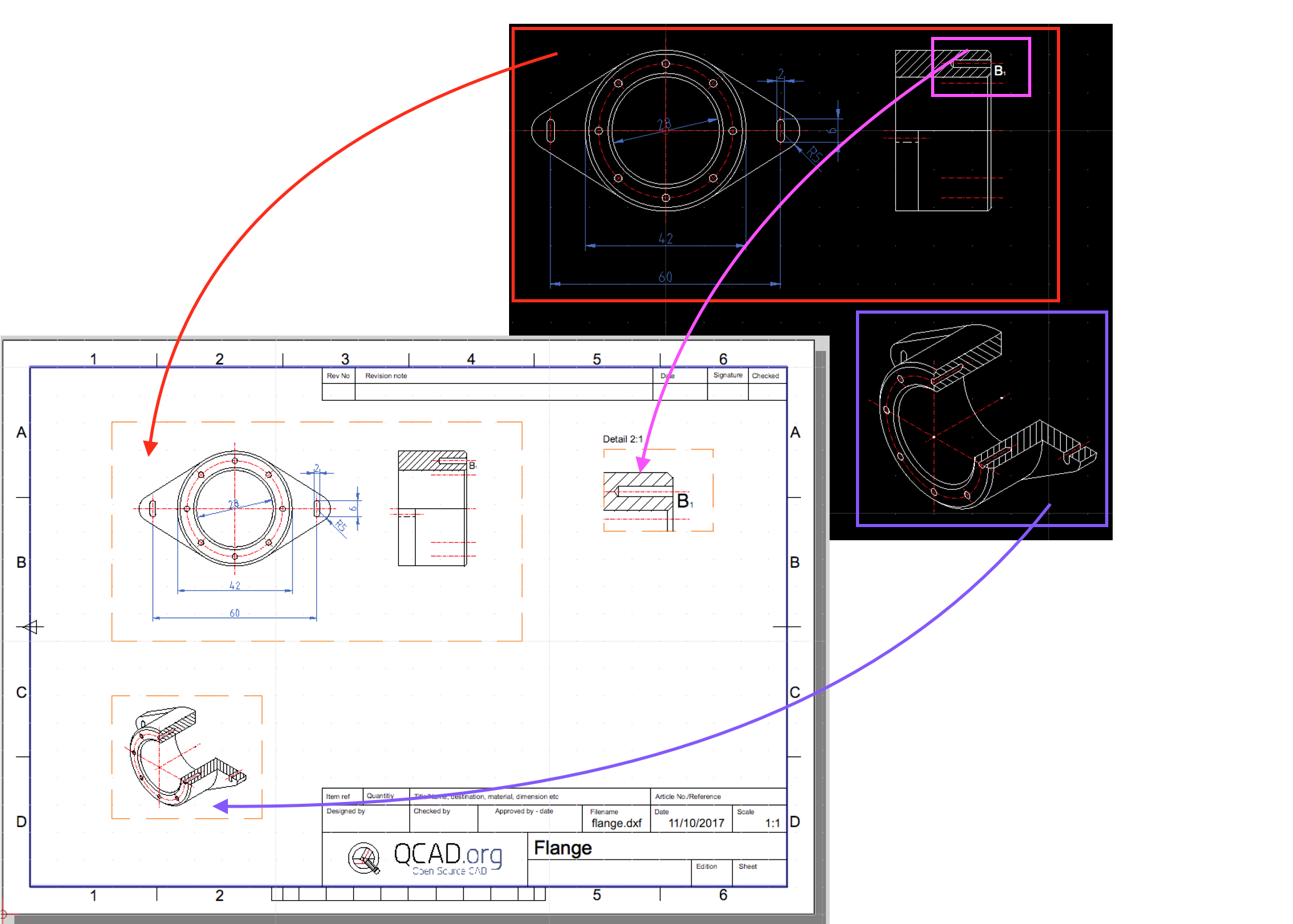